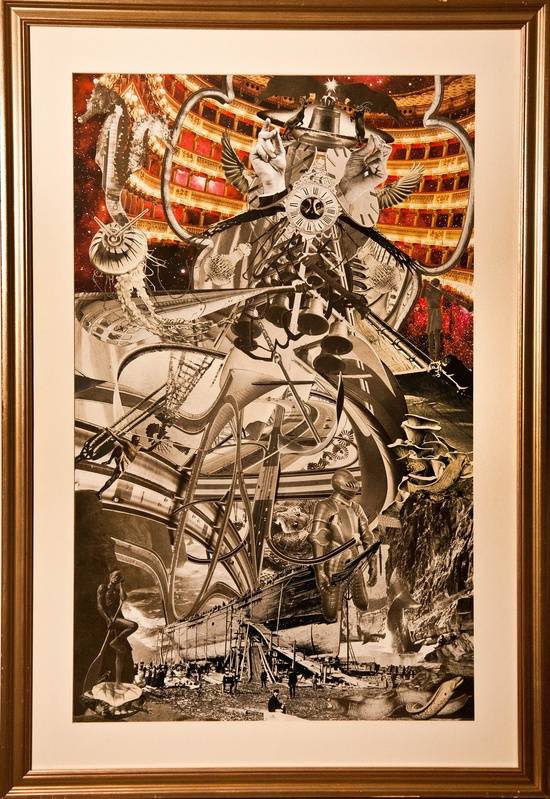 (65cm x 95cm / 26" x 38") This collage is an attempt to visualize our last moment. A grounded ship, no longer seaworthy, has but its memory of sea lanes, expressed here by curving roads and highways like open flapping sails. Our mortal remains, like a suit of armor, straddles the bowsprit. Hidden like a ghost on the bell tower is the outline of an elderly rower, hands upon oars. One oar becomes a train, the other a mast. A clock face is his head. An owl peers out, a Kikuyu (Kenyan tribe) harbinger for death. Above, hands with cocked, ready to snap, fingers arise from multiple clock faces atop the bell tower. Goats ready to butt each other rise up on either side of a cosmic bell. To the left side, the seahorse is a brave and patient navigator of the seas. He blends into the scroll of a violin and a jellyfish, the latter being a shamanic symbol of acceptance and faith. The last chime will happen suddenly and be over. A well-lit opera house, suspended in the heavens, witnesses our last. Other "last-gasp" images to ponder: lower left: elderly pensive rower standing on upside-down dying tortoise | lower right: diving dolphin giving birth | bottom: Moray eel striking at oblivious seated man | behind armor suit: plaintive rat caught by boa constrictor | mid-left: fisherman about to launch his spear at eel to right | upper mid right: tribal elder blowing horn