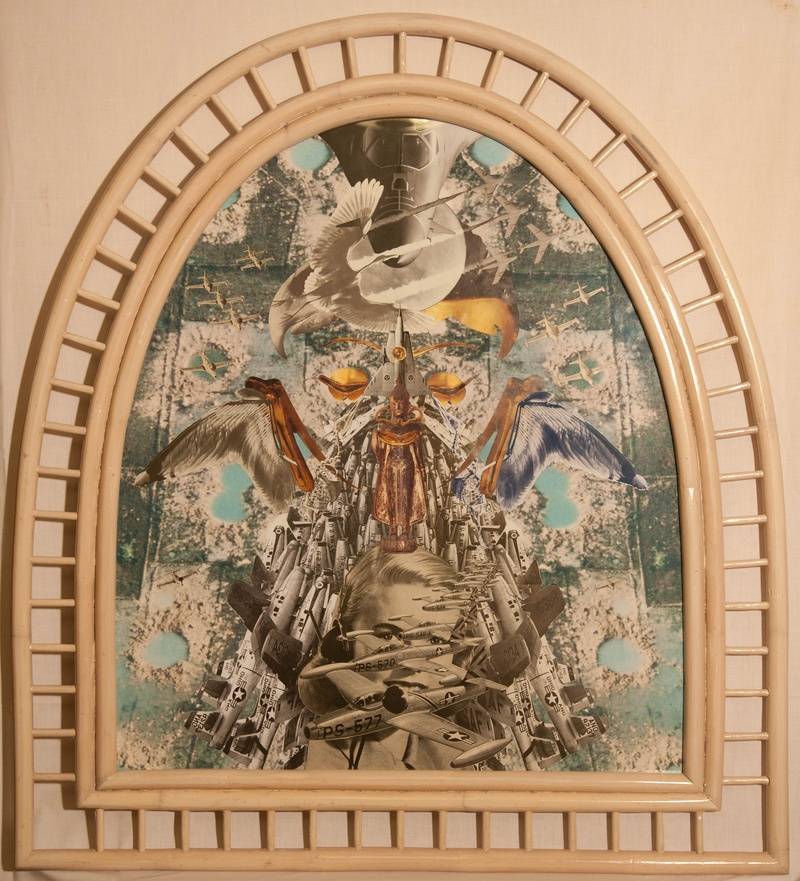 (70cm x 82.5cm / 28" x 33") Buddha Hears alludes to misguided wars in Southeast Asia, ironically juxtaposing natural and man-made flight and variously turned V-shaped geometrics. At the bottom, a phone operator whose visage is criss-crossed with flying war planes is set against a pyramidal pile of crashed fighter planes above a bomb-cratered landscape. Atop the operator's head and central to the assemblage stands a statue of the Buddha whose shape is mimicked by a warplane above it with an even tinier plane notched on its left side wing echoing the upturned hand on the Buddha statue. In the center, the remnants of a larger Buddha's face merge with various elements of the backdrop, so that the eyes emerge from bomb craters, the outlines of the nose blend with the upper shoulders of the small Buddha statue and an eagles' beak is superimposed on the left forehead of the face, echoing the outline of the right forehead. Spanning out from the Buddha's elongated ear lobes are dead birds' wings whose skeletal remains blend with the crashed corpses of planes on either side of the operator's face. At the top, a modern day bomber with its in-air refueling port in view cuts across a full moon against which a crane is flying. The crane, symbol of happiness and eternal youth with its legendary millennial lifespan, is pierced by the bomber's left canard while flying in the wake of jet fighters. The Buddha serenely witnesses the short-sighted destructive folly of humankind's bellicose nature.